Literally top on the list of attractions in the Borough of Richmond is King Henry
VIII’s Mound, the highest point in Richmond Park. It is so called because the King
allegedly stood there in 1536 to witness a flare being fired from the Tower of
London to signify that Anne Boleyn had been beheaded writes local historian, Tim
Catchpole. 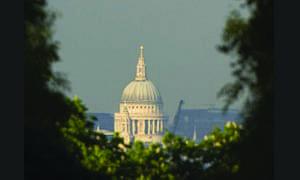 The Mound commands a spectacular, panoramic view westwards across the Thames to Windsor Castle
and, when you turn eastwards, there is a remarkable keyhole vista through a holly hedge and along a
corridor through the Sidmouth Plantation to St Paul’s Cathedral standing majestically on the horizon.

The keyhole in the holly hedge was created in 1976 by the eccentric James Batten, alias JB, a resident of
Ham Common, who died in December last year aged 90. Batten had studied an ancient map of
Richmond Park showing an avenue of trees aligned eastwards from the Mound and he wondered what
was framed by it. He accordingly attacked the hedge with a handsaw and clippers and marvelled at his
discovery – the dome, drum and peristyle of the Cathedral gleaming ten miles away with no blockage in
front and nothing behind except blue sky.

No sooner than he had made his discovery news got out that there was to be a public inquiry into the
redevelopment of Liverpool Street and Broad Street Stations. Batten gave evidence at the inquiry saying
that the development would rise up behind the dome and mar the vista, the Inspector regretted the
intrusion into the view, even from so far afield, and Secretary of State Peter Shore said the corridor vista
should be preserved. It eventually became preserved by statutory order from Secretary of State Chris
Patten in 1991.

Later in the 1990s the Mound underwent an enhancement which included the installation of an
illustrative viewing plaque with Batten’s artwork of the panorama looking west, a wrought-iron grill
through the hedge looking east and a telescope revolving between the two. However, the new
millennium began with the first Mayor’s Plan for London which showed the removal of the corridor vista
from among the protected views. Batten exploded with rage and found himself surrounded by a large
fan club at the public hearing into the Plan. Mayor Ken backed down and allowed a much narrower
protection.

In 2008 Mayor Boris reinstated the protection to its original width.
In the last ten years there have been threats to the vista from development schemes in front of the
cathedral in Victoria and behind it on the Bishopsgate/Goodsyard site, but the coup de grace to the
preservation has finally come from the 42-storey tower in Stratford which was approved by the Olympic
Development Authority in 2011 without the knowledge of the Richmond Council, nor the Royal Parks,
and now looms visibly 4 miles beyond the dome.

The Royal Parks has installed the Batten bench on the Mound as a token of gratitude and will continue
to prune the hedge and the avenue in his memory.
The obituary of James Batten was published in The Times on 29 January 2019.